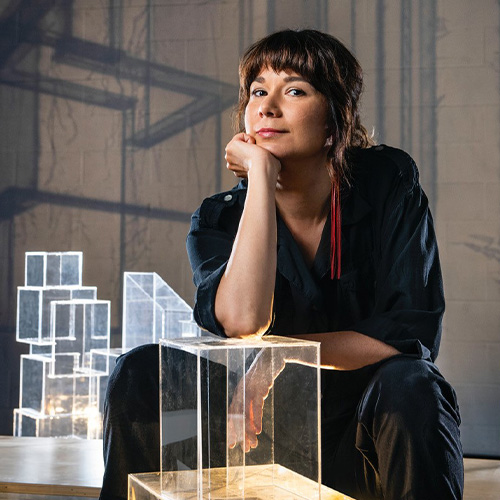 Toronto-based Lisa Jackson is an Anishinaabe filmmaker (Aamjiwnaang) whose documentary and fiction films and VR work have garnered two Canadian Screen Awards, been nominated for a Webby, broadcast widely, and screened at top festivals including Sundance, Tribeca, SXSW, Berlinale, and HotDocs. Indictment: The Crimes of Shelly Chartier won best doc at imagineNATIVE and is one of CBC’s top watched docs. She recently launched Door Number 3 Productions currently in production on feature hybrid documentary Wilfred Buck. She was awarded the 2021 Documentary Organization of Canada’s Vanguard Award, is an ISO-MIT Fellow, has an MFA from York University, and is part of the NFB Indigenous Advisory as well as the Indigenous Screen Office’s Membership Circle. She’s an alumna of TIFF Talent and Writers Labs, as well as the CFC Directors Lab, and Playback Magazine named her one of Ten to Watch. See more at doornumber3.ca.

Lisa Jackson’s work has screened at SXSW, Berlinale, Hotdocs, Tribeca and London BFI, and aired widely on television. Her IMAX-shot short Lichen premiered at Sundance in 2020 and she’s made works ranging from VR to animation to a residential school musical. Indictment: The Crimes of Shelly Chartier won the 2017 imagineNATIVE Best Doc award and is one of the top watched docs on CBC. Her work has screened extensively in educational, community as well as museum and gallery settings and in 2020 she launched her production company Door Number 3 Productions (doornumber3.ca), currently in production on the feature documentary Wilfred Buck, supported by the NFB, Sundance, Sandbox Films, Telefilm, Bell Crave, CMF, the ISO, and winner of the Hot Docs Forum Best Canadian Pitch prize. Alongside Clique Pictures, Door Number 3 recently produced Hot Docs Citizen Minutes short docs on civic engagement, which premiered at the 2021 festival.

Her Webby-nominated VR Biidaaban: First Light premiered at Tribeca, exhibited internationally to 25,000+ people, and won a Canadian Screen Award (Canada’s Oscar), the second time she’s received this honour. Transmissions, a 6000-square-foot immersive multimedia installation and sister project to Biidaaban, premiered in Vancouver in 2019, and was featured on the cover of The Georgia Straight. In 2016, she directed the VR Highway of Tears for CBC Radio’s The Current which was nominated for a Canadian Association of Journalists award. In 2015 she was drama director for the APTN/ZDF docudrama series 1491: The Untold Story Of The Americas Before Columbus, based on the bestselling book by Charles C. Mann, which was nominated for a Canadian Screen Award. She’s made more than 20 films, including CTV doc Reservation Soldiers, 1-hour doc How A People Live, and shorts SAVAGE, Suckerfish and Snare.

She is mixed Anishinaabe (Aamjiwnaang) and settler descent, earned a BFA in Film from Simon Fraser University, an MFA in Film Production from York University (thesis prize), and lives in Toronto. She’s an alumna of TIFF Talent and Writers Labs, IDFA Summer School, and CFC Directors Lab. She is a well-known advocate for Indigenous screen sovereignty, the Documentary Organization of Canada awarded her their DOC Vanguard Award, Playback Magazine named her one of Ten to Watch, she is an ISO-MIT Fellow at the Open Documentary Lab, and she sits on the National Film Board’s Indigenous Advisory Board.