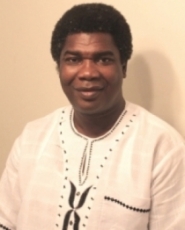 Professor Amegago is a specialist in West African Performance arts with broad interest in the field of cultural studies, interdisciplinary music dance and theatre performance, cross-cultural aesthetics, curriculum development and implementation, arts and education philosophy, West African and African Diaspora ceremonies and festivals. He began performing music and dance and ceremonies at a very early age and led many music and dance groups in communities and institutions of Ghana.

In 1982, in his native Ghana, he founded the Dunenyo cultural group that specialized in the Anlo-Ewe music performance traditions and served as the group’s artistic director, choreographer, master drummer, poet and playwright. He also founded and directed Nutifafa African Music and Dance Ensemble in Vancouver in 1994 and toured extensively with the group throughout USA and Canada. He served as a drummer in Alpha Yaya Diallo and Bafin, a Vancouver based contemporary Guinean band, led by Alpha Yaya Diallo. He had also performed with renowned artists, such as Dido Morris, Albert Saint Albert, Glen Velez, Trichy Sankaran, Sal Ferreras and Themba Tana in Vancouver.

He directed the Anlo-Hogbetsotso festival in the southern Volta Association of Toronto (in 2005 and 2006), and served as a curator of the Performing Diaspora initiated by Prof. Danielle Robinson in collaboration with the Harriet Tubman Institute on Research on Global Migrations of African Peoples at York University (in 2011 and 2012). He is currently serving as artistic director of Nutifafa Afrikan Performance Ensemble and leading the group in performances in the various communities, schools and theatres in Canada and USA.