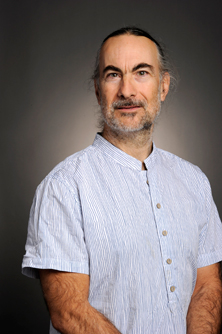 Professor Sinclair’s web/data art work Variations/Variantes, included in a retrospective of net.art in Canada since 2000 by the Centre International d’Art Contemporain de Montréal (no 32 / 2008), is part of a series of works based on oh, those everyday spaces, a database of over 25,000 images captured during a 15 month period while cycling in and around Toronto. Work from this series has been exhibited at the Images Festival (Toronto), T-minus Festival of Time-Lapse Video (New York), no-org.net (Jerusalem), SINTESI : Festival Delle Arti Elettroniche (Napoli), RestCycling Art Festival (Berlin) and Toronto Bike Week Bike Art Showcase.

Professor Sinclair has worked with choreographers and dancers to create works that explore movement-based manipulation of sound and image. His collaborators include Holly Small (a journey toward the end in the shape of air, Draw a Bicycle, Night Vision – Nyx), Susan Lee, Yves Candau/Nur Intan Murtdaza and Karen Kaeja/Diana Groenendijk (Stable Dances at Nuit Blanche 2008).

The exploration of the sonic world is important to many of his works, and he has collaborated with numerous sound-based artists to create audience-focused interfaces. They include Andra McCartney (Journées Sonores, Canal de Lachine, interaction / rétroaction / feedback, Toronto-Norwood-Toronto); Chantal Dumas/Christian Calon (around radio roadmovies); and Darren Copeland/New Adventures in Sound Art (Toronto Island Sound Map, Mississauga Sound Map).

Current projects include the development of several physical computing-based works. The Cyclist Comfort Visualizer is a wearable computing piece designed to be worn by a cyclist in traffic. Making Conspicuous Consumption is a set of works that display aspects of a building’s energy consumption. He is also part of a SSHRC-funded team holding a research creation grant, engaged in a project titled Reflections of the Unimaginable; a Multimedia Rendering of Three Cities Hosting the Holocaust.

Professor Sinclair has taught new media in the Faculty of Fine Arts at York since 1990. He was the primary designer of the Faculty’s new media courses and was instrumental in the development of York University’s inter-Faculty Specialized Honours BA Program in Digital Media in conjunction with the Department of Computer Science and Engineering and Department of Communication Studies. An enthusiastic participant in collaborative teaching, he  has developed innovative cross/interdisciplinary courses in interactive dance with Holly Small (Dance) and physical computing with Wojtek Janczak (Design), as well as working on technology-enhanced learning initiatives with Renate Wickens.