The Evolution of a Media Artist

Shelby Della Payocyoc is a fourth-year student pursuing a major/minor in Media Arts and Environmental Studies. In the past few years, she has experimented with 360° filmmaking and delved into the realm of Computational Arts to develop her first video game: Originally designed for Virtual Reality, it is playable here as a prototype for a desktop experience.

Now Payocyoc has applied her studies in environmentalism to an interactive web documentary revealing the forgotten histories within Tkaronto (Toronto), her hometown. You find Home & Back Again here on itch.io. We spoke with her about her evolution as a Media Artist.

AMPD: Why did you choose to study Media Arts?

Shelby Della Payocyoc: At first, I didn’t have a clear path that I wanted to pursue but I did want to continue within an art stream. What drew me to Media Arts was its focus on transmedia and interdisciplinary practices, so it really called to my interests in film, video games, and new digital media forms.

AMPD: In what ways have you grown as a Media Artist these past few years?

SDP: I’ve become much more imaginative ever since first-year; now that I’ve been exposed to all the possibilities of what new media can create. By branching out to other streams within AMPD such as music and computational arts, I’ve become more confident in my skills and potential on both a creative and personal level. I’ve also become much better when it comes to collaborating with others which I think is the most important aspect within the film and media field.

AMPD: I love how you mentioned the collaboration with computational arts & music. Why did you decide to branch out your network within AMPD?

SDP: I have some background in music, so I wanted to delve more into that stream. For computational arts, I’ve only become involved this year because a lot of the foundations I wanted to incorporate in my 3rd year project were provided by that department. By branching out, a lot of the projects I want to create become more feasible in terms of what I can do and imagine. For my capstone project, I’ll be incorporating these skills of 360° and interactive video, 3D modelling and creative visualization.

AMPD: The 360° video is very cool, that medium is so fascinating! Was that your first time working in 360° filmmaking?

SDP: This was my first time working with 360° video. I’ve learned how you should take advantage of all the space you have and how hard it is to hide from the camera when you don’t want to be in the shot!

AMPD: Both your 360° video and the prototype game feel very confrontational as a participant. What responses were you trying to elicit?

SDP: For the 360° video, my partner and I were mostly going experimental and wanted to interact with the camera as much as possible to further immerse the viewer. For the prototype game, my team definitely wanted the experience to feel confrontational. The aim was to have the user reflect on the dialogue happening in-game and the choices they made based on it. By having the audience at the forefront in both these projects, audiences have raised deeper questions regarding the meaning of the narrative. 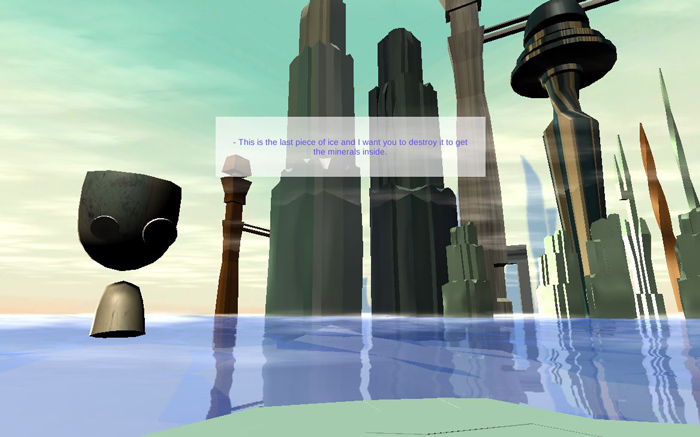 Still from Planar, a collaboration between Shelby Della Payocyoc and her Media Arts classmates

AMPD: How do VR and interactive experiences affect audiences differently than film?

SDP: Unlike film, interactivity and VR are consumed actively. What’s special about them is how the audience is also a part of the experience and how that changes the way these narratives are planned, shot, and told in comparison to traditional filmmaking.

AMPD: Let’s talk about your capstone project. What are your motivations for revealing the forgotten histories within the city?

SDP: I have always been passionate about environmentalism and during my BES, I’ve learned how you can’t consider the environment – and solutions to climate change – without considering Indigenous communities. As we continue to push and prioritize economic growth, we and our natural environment won’t be able to hold on for much longer. When it comes to the diverse Indigenous cultures and their worldviews, I believe we all have something to learn from how they are able to live mutually and harmoniously with the environment, and learning about Indigenous histories can be a first step for many. Along with Indigenous stories, I will also be including those from other marginalized groups in a similar manner.

AMPD: Why is it important for users to interact with this content?

SDP: What I hope people will take away from this project is a new perspective and worldview towards popular discourse of colonial history within Canada. I’d like to open up dialogue regarding the myth of how Canada was founded on peace and liberty and to acknowledge the histories that are pre-colonial.  I don’t want to tell people what to think but rather provide resources and stories that will allow them to formulate their own critical thoughts on what they already know and perceive to be true. Relaying back to environmentalism and these times of crises regarding social and climate justice, it’s important for us to be aware of existing lifestyles that aren’t destructive on a community and global scale.

AMPD: What aspects of your student experience has benefitted you the most as an artist and storyteller?

SDP: I’ve been to quite a few computing labs at York, but the one I’ve spent the most time in was the Intersections Lab at the Goldfarb Centre when my laptop couldn’t handle all the programs I needed for assignments. Although facilities alone only get you so far, credit also goes to the Media Arts professors I’ve had, Taien Ng-Chan and Patricio Davila, who’ve introduced to me whole new ways of storytelling and pushing questions so I could better understand the importance of the stories I want to tell. I’d also like to mention FES professor Peter Timmerman for helping foster my enthusiasm for environmental arts!

AMPD: Any advice for someone who is considering going into Media Arts?

SP: My advice is to be open-minded about the possibilities of film since Media Arts encompasses so many mediums and platforms for storytelling. To make the most of the program, I’d suggest dipping your toes in the foundations of digital media to help further your skills as a storyteller in the cinema and media space.