“The beauty of filmmaking is that you can make absolutely anything with the resources that surround you. You simply must really have to stretch your creative mind,” says Abraham David, second-year AMPD film student and recent Toronto Film Magazine Fest Summer Season Award winner, on creating his award-winning budget-conscious short film My Girl, Skelly.

When the pandemic first began, several of David’s film thesis ideas were shot down due to necessary safety precautions on film sets. Tired of creating despite restrictions, David looked to them for inspiration. David thought, “I thought what if I made a film where the protagonist had to be wearing a mask and social distancing, but something that’s not covid related, but somehow a story that has to involve the protagonist wearing a mask and social distancing.” 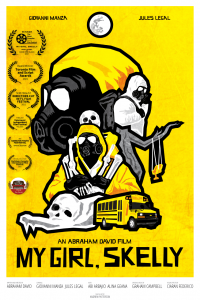 Enter My Girl, Skelly – A post-apocalyptic nuclear winter where a lonely scavenger finds acquaintance in a human skeleton that reminds him of a loved one. David’s childhood fascination inspires the story with sci-fi stories like Station 11 and Children of Men, “I’ve always been into post-apocalyptic media.” David’s vision had a slight setback. He didn’t have a Hollywood budget.

Getting creative, David shot with a Canon DSLR camera and only spent on props and wardrobe like gas masks and hazmat suits. He found an idyllically apocalyptic setting on the edges of a friend’s farm for free fit with an abandoned farm and frozen river. The project totalled under $400, making My Girl Skelly a testament to the power of creativity.

One problem money couldn’t seem to solve was Canada’s harsh winter. Filming outdoor provided a COVID-safe environment with the catch of only capturing ten to fifteen minutes at a time. Shooting in unpredictable weather proved to be the biggest challenge. “One day, the ground was all covered in snow, while the other day it was all melted,” said David.

Despite the bio-hazardous and environmental setback proving the perfect setting for a world-ending disaster, David created a picture-perfect film debut. My Girl, Skelly took home Best Short Film accolades at the Great Canadian Sci-Fi Festival, beating out 38 films from around the world.

David notes classmate and professor critiques as an influencing factor in his success, “I was able to screen the rough cuts in class and get feedback from my peers and Professor Lawrence, and if it weren’t for the criticism and advice I received, the film wouldn’t be what it is. It is valuable to get different eyes on your project.”

One piece of advice David has for peers looking to take the plunge without breaking the bank. Remember, a compelling story is at the core of any good film, and the rest is just creative problem solving to serve the vision. “After all, we are in the business of make-believe,” says David.