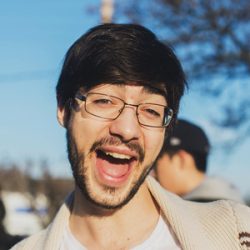 For York U Film Production alumnus Kevin Grou (BFA ‘18), university was a creative playground that delivered on everything that post secondary is supposed to: hands on experience, understanding of professional standards, wisdom and mentorship from his Profs, and a network of creative friends. It came with some other unexpected benefits too – like embracing creative risk and the originality of his own ideas, realizing how influential the people you surround yourself are, understanding that success happens more working with people instead of competing against them, and learning not to set your career aspirations and expectations against your own talents and gifts. 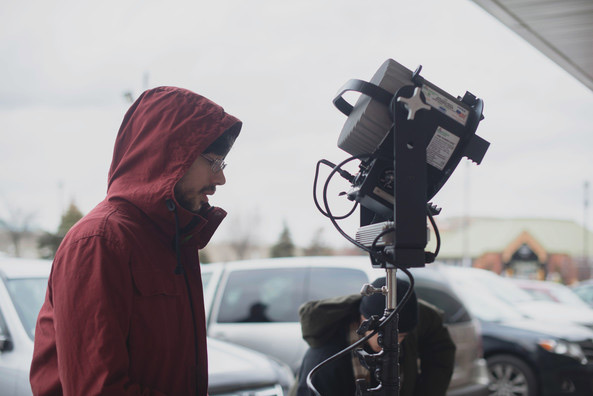 Since graduation he’s volunteered on a number of films, worked as a camera intern on the Prime Original series Dino Dana 2 with Sinking Ship Entertainment and now has a full-time job as a digital video editor at Alert Driving, an online driver training and business car fleet safety program management company that serves some of the largest corporations in the world. With Alert Driving, he’s responsible for editing footage from various countries to create video tutorials, mask footage, organize data, and export finished products for review.

“It was a goal of mine was to find a job within my field of interest that keeps me financially stable enough to live independently and I successfully reached that with my current editing job,” Kevin said. “My future goals are to buy more film equipment, gain access to higher paying jobs, and shoot my own short films along in order to submit to and attend film festivals.” He also wants the sort of role in the film/television industry where he can hire friends and other York grads. “Providing opportunity to people who have helped me is a huge priority for me.” 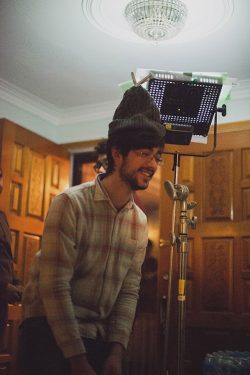 Brightening an interior entrance of a house (and goofing off).

“With the studio facilities, range of equipment, and diversity of course options, York University offers more than any other Film program in the country. It urges students to know what they want and pursue that career so by the time graduation arrives there are seeds planted for opportunity,” Kevin said.

A creative breakthrough Kevin had during his degree was not to over rely on other people’s opinions. “I invested far too much in other people’s opinions my ideas suffered because of it. Being genuine and keeping to my own unorthodox, out-of-the-box thinking is what made my stories unique in the first place. So rather than conforming them to what people expect, I decided to distance myself and only share my thoughts to people once they were fully formed. For me, it’s easier to carve a statue out of marble if the block is untouched before you begin!”

One of his electives, History of Astronomy opened his mind and changed the way he thought about success. “Many of the scholars and astronomers that made breakthroughs were just as lost as anyone else in any other field. They worked with what they had, sometimes just being in the right place at the right time, and most times worked off one another rather than against each other.” The concept of breakthroughs developing through building off someone else’s knowledge made Kevin feel more comfortable with taking inspiration from others around him. 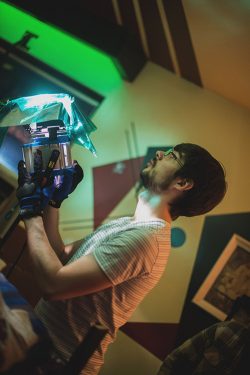 Simulating neon accent lighting to make the set look like it’s an apartment situated above a restaurant.

Our friends influence us in many ways, and looking back on university he saw his social circles’ influence in everything from the courses he picked to his success in his film making efforts. “It’s important to be critical of who you spend your time with and to value yourself and what you offer to other people. Just the notion of respecting ones own efforts and ability to contribute is strong enough to influence others and help make university a much less dramatic and stressful time.”

Another takeaway he offers for future happiness is to align your career goals with what you are good at. “Maybe it’s smarter to make easy money performing a task you are gifted at while funding a passion project. If you find yourself straining to achieve results when you find success more organically elsewhere, seriously reflect on what comes easy to you and how you can incorporate passion for something on its own time outside of work.”

For students about to graduate he warns not become complacent with the celebration. “This is a door closing in front of you, not behind you. There is no better time to grind into job applications, interviews, networking, and creating opportunities to capitalize on before the end of the year. Graduation is time to get going, and you have everything you need to start. Goodluck”