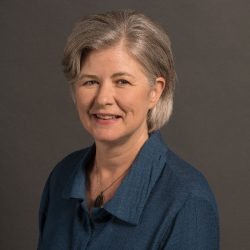 Canadian composer Stephanie Martin is Associate Professor at York University and Graduate Programme Director in the Music department within the School of the Arts, Media, Performance and Design. She is conductor emeritus of the large oratorio choir Pax Christi Chorale, director of the women’s medieval ensemble Schola Magdalena, and past director of music at the historic church of Saint Mary Magdalene.

Her second opera ‘Llandovery Castle’ (2018) commemorating Canadian WW1 nurses, earned Martin a creative achievement research award at York. A second collaboration with librettist Paul Ciufo, ‘The Sun, the Wind, and the Man with the Cloak’ (2019) was commissioned as a parting gift by Pax Christi Chorale.

Awards include first prize in the Exultate Chamber Singers’ composition competition (2009), and first prize in the Association of Anglican Musicians composer’s competition (2010). She is an Associate Composer of the Canadian Music Centre, and was Composer in Residence for the Barrie Music Festival, 2012.   Recent performances include her cantata Winter Nights with the Grand Philharmonic of Kitchener-Waterloo. A choral work commissioned by the British choir Ex Cathedra, The Portinari Nativity on a text by Cori Martin received seven performances in England in December 2012, including a performance at St. John’s Smith Square, London. Christ Church Cathedral, Victoria B.C. commissioned The Legend of the Bird (Dec. 2012) and The Rock Dove (June 2014). Martin’s string quartet From a distant island received its third performance by Skyros String Quartet, June 2014.

As harpsichordist and organist, Stephanie can be heard on the Naxos, Marquis and Dorian labels, as well as a dozen self-produced albums. Her love of historically informed performance was fostered over 15 years of activity with Arbor Oak Trio who performed hundreds of chamber music concerts and several fully staged dramatic works, including Arne’s rarely heard Love in a Village, Locke’s Cupid and Death and Gay’s Beggar’s Opera.

Martin holds degrees from the University of Toronto and Wilfrid Laurier University, and is an Associate of the Royal Canadian College of Organists. In York University’s Department of Music, Faculty of Fine Arts, she teaches music history and performance, harpsichord, organ and coaches historical ensembles.