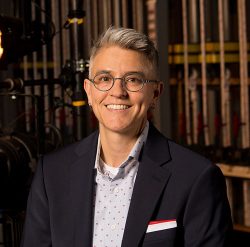 Sarah Bay-Cheng, PhD was appointed as the Dean of the School of the Arts, Media, Performance and Design in 2019. Prior to York University, she served as Chair and Professor of Theatre and Dance at Bowdoin College and as the founding Director of Graduate Studies in Theatre & Performance at the University at Buffalo, SUNY (UB). In 2012, she founded the Technē Institute for Arts and Emerging Technology at UB, a collaboration that connected faculty researchers and students working at the intersection of art, computer science, design, engineering, media and performance.

An internationally recognized scholar in theatre and performance studies, Bay-Cheng’s research focuses on the intersections among performance and media including histories of cinema, experimental theatre, social media, and computer technology in contemporary performance. Her book publications include Performance and Media: Taxonomies for a Changing Field (2015) and Mapping Intermediality in Performance (2010), and Mama Dada: Gertrude Stein’s Avant-Garde Theatre (2005). Her essays appear in Theatre Journal, Theater, Contemporary Theatre Review, and Performance Research, among others. Her current monograph project explores digital historiography and performance (forthcoming), and she is the co-editor for the Palgrave Handbook on Experimental Theatre with Jacob Gallagher-Ross.

Bay-Cheng frequently lectures internationally and in 2015 was a Fulbright Visiting Scholar in the Department of Media and Cultural Studies at Utrecht University in the Netherlands. She edits the book series Avant-Gardes in Performance (Palgrave) and is an associate editor for the Journal of Dramatic Theory and Criticism and Contemporary Theatre Review, while serving on the editorial and advisory boards for ASAP/Journal for the Association for the Study of the Art of the Present and the International Journal of Performance Arts and Digital Media, among others.

She currently serves on the executive committee for the American Society for Theatre Research and has previously served on the governing boards of Performance Studies international and the Association for Theatre in Higher Education. Since 2016, Bay-Cheng can be heard monthly as a co-host for the podcast, On TAP (Theatre and Performance) with Pannill Camp and Harvey Young.