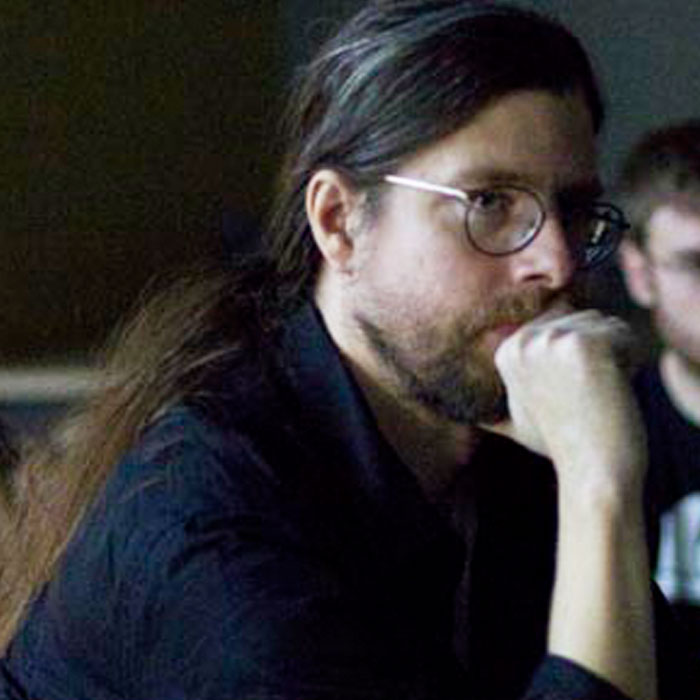 The work of intermedia artist Marc Couroux is firmly rooted in experiences developed while active as a contemporary music pianist. His early (piano performance) works were centered around a reformatting of the audience-performer dialectic, challenging the orthodoxies of transmission and reception within the sociopolitical confines of the public event. Case in point: in 2000, le contrepoint académique (sic) (a tactical intervention into the concert ritual) was presented at the Festival International de Musique Actuelle de Victoriaville, a work described as “controversial”, “demented” and “illuminated”. Rockford – Keep on Rolling, a three-screen video performance, reflects a Los Angeles plunged into rolling blackouts and was presented in a number of international festivals, including Club Transmediale in Berlin in 2006 and Portland’s PDX Fest (Peripheral Produce) in 2009.

In 2006, Watergating (Selected Hearings), a large-scale audio-video performance work was presented at the Vasistas festival in Montreal; in this work, the concepts of hearing (acoustical phenomena) and listening (socially or politically mediated hearing), were investigated through the lens of the Watergate scandal.

In 2007, Couroux presented two offshoots of Watergating: Carpenters et al, Downey Lyrical Holdings, a Real-Time System as of March 29, 2007 was concerned with exploring concepts emanating from and associated with technology, through non-technological means (such as delay), and was performed by neither/nor in Toronto; The Fetishization of Music and the Regression in Listening, (with Juliana Pivato) presented in Edmonton in 2007 as part of Latitude 53’s Visualeyez festival of interdisciplinary art, was a performance intervention designed to operate a form of Situationist détournement on the muzak environment.

In 2010, Couroux presented The Following, Episode 1 (Modified Limited Hangout) with Special Guest Star Robert Webber (a meditation on the legislative capacities of formulaic TV structures), Executive Summary (on the irreconcilability of visual and acoustic spaces), Strange Homecoming, A Structural Comedy (a digression on the tune-running-thru-the-head in the age of mechanical reproduction), and sections of In a Sedimental Mood (an investigation of background and foreground music through an unfolding of repetition and difference in the wake of Satie’s musique d’ameublement) as part of a solo show at Toronto’s experimental video series Pleasure Dome. The latter two works were later installed during the celebrated Open Ears Festival of Music and Sound in Kitchener.

The artist is currently at work on a television intervention series (online) entitled We Know What You’re Looking For, comprised entirely of altered commercials; a two-room installation collapsing durational onsite performance with environmental Muzak; a coffee shop / bookstore sound installation troping on the perceptual contingencies of technological failure and an extended work for disco band. Curatorial enterprises are also forthcoming: retrospectives of the work of the Television Recuperation Unit (1977-82) and video artist Oswald Store are planned for 2012-13. Couroux and Pivato will be artists-in-residence at Threewalls in downtown Chicago in May-June 2013, where they will present six collaborative works-in-progress, involving daily tasks distilled from a long-standing conversation, involved with attempts to re-situate art-making in light of the pervasive effects of a viral, techno-centric culture. Through sound, video, drawing, notation and live performance, their work examines the everyday tropes and patterns that determine to a large extent the conditions by which art can effectively function: hybridization and recombination, legibility and saturation, reduction and spin, distraction and fragmentation, repetition and difference.

Couroux founded and directed Ensemble KORE (1997-2010) in Montréal with composer Michael Oesterle in order to recreate a living relationship between the composer and the listener. He has lectured on music and video art at the Dartington College of Arts (UK), Princeton University, the State University of New York at Stony Brook, the Eastman School of Music, The University of York (England), the Royal Conservatory (The Hague), McGill University (Montréal) and Concordia University (Montréal). Couroux joined York University’s Faculty of Fine Arts in 2006.