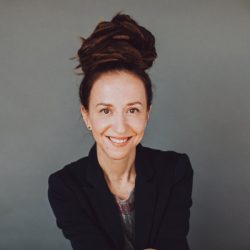 Ingrid Veninger holds an MFA from York University and has been a part-time faculty member of AMPD (School of the Arts, Media, Performance and Design) since 2012. She joined the full-time faculty at York University in July 2019. Born in Bratislava and raised in Canada, Ingrid has been celebrated as “the DIY queen of Canadian filmmaking” (Liam Lacey, The Globe and Mail). Since 2008, she has produced ten feature films with premieres at TIFF, Rotterdam, Locarno, Slamdance, Whistler, Rome, Hot Docs, Karlovy Vary and MoMA in New York. With retrospectives of her work in Ottawa at the Canadian Film Institute and in Santiago, Chile at FEMCine, Ingrid received the WIFTS International Visionary Award, the Alliance of Women Film Journalists EDA Award for “Best Director”, and the Jay Scott Prize awarded by the Toronto Film Critics Association. A member of the Directors Guild of Canada and participant in the inaugural TIFF Studio, Berlinale Talents, and Rotterdam Producer’s Lab, Ingrid has been a mentor at the Canadian Film Centre and Screenwriter-in-Residence at the University of Toronto. An advocate for gender parity, Ingrid initiated the pUNK Films Femmes Lab in 2014 to foster six narrative feature films written and directed by Canadian women, sponsored by Academy Award winner Melissa Leo. In addition to touring film festivals with her 2019 feature, “El Mundo o Nada” (The World or Nothing), Ingrid continues to led filmmaking workshops and participatory masterclasses in Canada, the U.S., and Europe.