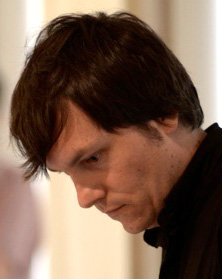 Doug Van Nort is Canada Research Chair in Digital Performance and an Associate Professor at York University, cross-appointed between the departments of Computational Arts and Music. At York he has founded and runs the DisPerSion (DIStributed PERformance and Sensorial immerSION) Lab.

These broader questions are driven by Van Nort’s twenty years of practice as an electroacoustic composer/improviser, where he explores the boundaries of noise and tone, thick layering of materials, microsounds, texture, drone, wide spectral and dynamic ranges, and the emergence of new content that results from interactions with idiosyncratic and immersive acoustic spaces. Van Nort performs on self-made electronic instruments that assume a turntable-like, sculptural approach to shaping sound using his hands and voice. He often captures sounds live in performance, while his recorded source materials span instruments and natural environments, including any and all sounds discovered through attentive listening to the world.

Van Nort often performs solo as well as with a wide array of artists across musical styles and artistic media. He was a founding member of Triple Point with Pauline Oliveros and Jonas Braasch, and while living in New York was part of a duo with underground noise legend If, Bwana and was an active member of the Composers Inside Electronics, founded by the late David Tudor. In recent years he has performed and recorded with dozens of artists including Francisco López, Pauline Oliveros, Stuart Dempster, Malcolm Goldstein, Al Margolis (If, Bwana), Chris Chafe, Jonas Braasch, Kathy Kennedy, Ben Miller, Alessandra Eramo, David Arner, Anne Bourne, Eric Leonardson, Judy Dunaway, Katherine Liberovskaya, Carver Audain, Paul Hession, Jefferson Pitcher, Francois Houle, Jonathan Chen, and in Sarah Weaver-conducted ensembles alongside the likes of Gerry Hemingway, Min Xiao-Fen, Ray Anderson, Miya Masaoka, Franz Hackl, Mark Helias and Dave Taylor among many others. He has performed and presented his work at a range of venues including the [SAT] and Casa del Popolo in Montreal, on WNUR in Chicago, Casa da Musica in Porto, Betong in Oslo, Cafe OTO in London, Skolska28 in Prague, Liebig12 and QuietCue in Berlin, The Smithsonian in Washington D.C., Reina Sofia Museum in Madrid, The Red Room in Baltimore, Studio Soto in Boston, The Guelph Jazz Festival, Roulette, Harvestworks, the Flea Theatre, Socrates Sculpture Park, the New Museum, the Miller Theatre, Issue Project Room and the Stone in NYC, at Town Hall (NYC) on an ‘intonarumori’ as part of the Performa futurist biennial, at EMPAC in Troy, NY, at the International Conference on Auditory Display (ICAD), New Interfaces for Musical Expression (NIME), as part of the legendary Phil Niblock-curated ‘festival with no fancy name’ at Experimental Intermedia, at the NYC electroacoustic music festival and many other festivals and events across the U.S. and Europe.

His creative/research work has been supported and recognized by disparate sources including the NY Foundation for the Arts (NYFA), the NY State Council for the Arts (NYSCA), the National Science Foundation (NSF), the International Computer Music Association (ICMA), the Banting Fellows program, the Canadian Foundation for Innovation (CFI), Ontario Research Fund (ORF), The Social Sciences and Humanities Research Council (SSHRC) and the Canada Research Chairs (CRC) Program.

Recordings of Van Nort’s music can be found on Deep Listening, Pogus, Zeromoon, MIT Press and Attenuation Circuit among other experimental music labels. In late 2014 a Triple Point 3-CD set, released on Pogus Productions, was produced (selected, edited, mastered, graphic design) by Van Nort. It has drawn praise such as: “Electroacoustic improvisation has the potential to be a music of timbral complexity, of rapid shifts of sound colors within a multi-layered environment…Triple Point lives up to that potential, as would be expected from such a fine assembly of improvisers….Each has a distinctive voice, but the group’s sound is a genuinely collective, emergent object in its own right.” (Daniel Barbiero, Avant Music News). In a scholarly vein, Van Nort’s writing has appeared in Organised Sound, the Computer Music Journal, Digital Creativity, the Leonardo Music Journal, Kybernetes and the Journal of the Acoustical Society of America. He has also published in a variety of international conference proceedings, and was given the Best Paper Award at the 2010 International Computer Music Conference (ICMC). As a teacher, Van Nort has led workshops, seminars and courses that are designed towards enhancement of listening and creativity through a mixture of bodywork, listening/sounding exercises, and the use of analog/digital electronics as a shared medium for these collective experiences. These events leverage Van Nort’s experience of Deep Listening (certificate holder) and his life as a practitioner of electroacoustic composition/improvisation and sound-focused art/research. Van Nort also imports these methods into his university teaching, which was recently recognized by York’s School of the Arts, Media Performance and Design through their Teaching Award, given annually to a faculty member for excellence in teaching.