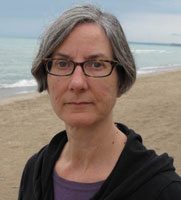 Professor Balfour is a print media and interdisciplinary artist who has exhibited and given lectures across Canada, and in the USA, UK, France, Germany, Spain and China. She has been a member of two artist collectives, the Toronto based Spontaneous Combustion and the Montreal based Venus Fly Trap. In the field of professional printing, she has worked for artists including Leon Golub, Komar and Melamid, and David Rabinowitch. Other activities involve artist residencies, conference papers, critical writing, and curatorial projects, including the two-volume publication and group exhibition at Open Studio entitled À la recherche (in search of practice-based research); the essay “Spectral Apostrophe” in PUBLIC 51: special issue on colour; and Carry-On Santander, a portable exhibition of artists’ books and multiples shown in Santander, Spain.

In addition to working in print installation, artist’s books, and multiples, Balfour has engaged with text-based art practices and print’s relationship to multiplicity. Her art practice began as an inquiry into the representation of women within medical discourse and an examination of the relationship between soma and psyche. Ongoing research involves reproduction, reproducibility, and the representation of the body within abstraction. Her most recent artist’s book is The Inkiest Black, a reflection on David Foster Wallace’s Infinite Jest. Current research considers representations of mourning and mortality.  Balfour endorses an expanded understanding of print media in the twenty-first century and believes that reports of the death of print have been greatly exaggerated.

Balfour joined the faculty of the Department of Visual Arts in 1999 . She previously taught print media, interdisciplinary studies, and feminist studio/theory courses at Concordia University. At York, she has developed two Critical Issues courses – Repetition, Reproduction, and Reproducibility and Artists’ Writing/Writing Artists. She teaches Lithography, Artists’ Books and Multiples, and Extended Print Practice in the Print Media Area, and has also taught Image and Object in the Drawing Area. From 2014-17, she served as the Graduate Program Director for the MFA/PhD Visual Arts Program. In 2016, she was appointed as Full Professor.