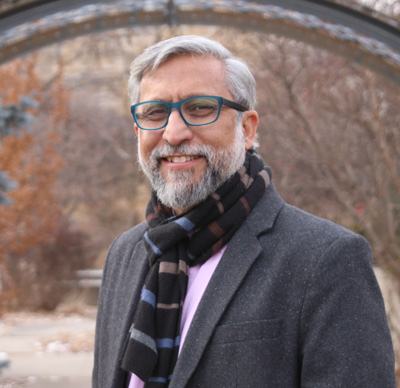 Professor Ali Kazimi (pronounced Ka-Zim-E) is filmmaker, writer, and visual artist whose work deals with race, social justice, migration, history, memory and archive. In 2019 he received the  Governor General’s Award for Visual and Media Arts, as well as a Doctor of Letters, honoris causa from the University of British Columbia.

Kazimi is the recipient of a prestigious John R. Evans Leaders Fund, from the Canada Foundation for Innovation to set up the Stereoscopic 3D Lab @York. He was the founding filmmaker, in 3DFLIC (3D Film Innovation Consortium) an inter-disciplinary academic/industry partnership (2009-12). In 2013 he designed and taught The Principles and Practice of Stereoscopic 3D Cinema, the first graduate course of its kind in the country. His stereoscopic 3D installations have been shown in galleries across Canada.

In 2012, Kazimi authored the nationally acclaimed book, Undesirables: White Canada and the Komagata Maru – An Illustrated History (Douglas & McIntyre) which was a finalist for the 2012 City of Vancouver Book Award and the 2013 BC Book Prizes (Roedrick Haig-Brown Regional Prize).

He has mentored and supervised several graduate students whose thesis films have received critical acclaim, among them Kathleen Mullen – Breathtaking (2010), Jorge Lozano – Moving Still-still life (2010), Zaheed Mawani –Three Walls (2011). Mawani’s thesis film, has won awards in Oberhausen and Atlanta and was nominated for Best Short Documentary for the Canadian Screen Awards (2013) and Vicki Lean’s documentary Until the Last River won the Nigel Moore Award for Youth Programming at DOXA (2015) and has been nominated for the Donald Brittain Award for Best Social/Political Documentary, Canadian Screen Awards 2017.