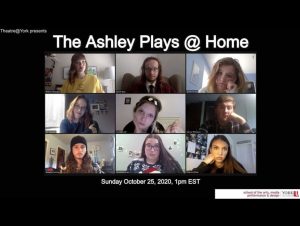 We have a dynamic Theatre @ York season planned. The Ashley Plays will kick things off with a bang on October 25 with a series of site-specific plays from the third and fourth year playwriting class (presented remotely). In late November, we will produce two specially commissioned online plays by Aaron Jan and Tabia Lau, directed by faculty member David Jansen and featuring a cast and crew of students from the BA/BFA program in Performance Creation, with support from MFA designers and others. This is a new venture for the department and we’re excited to see how it develops.

The Winter semester will be brimming with performances and festivals, beginning in January with the 3rd year Acting class’s studio production of Alice Birch’s Revolt. She Said. Revolt Again, directed by MFA candidates Alison Wong and Mandy Roveda (January 21-23), continuing to the playGround festival, a student-run festival of new works in February (February 8-12), always a favourite for first year students.

March brings the Devised Theatre Festival (March 16-20) and two MFA thesis productions, Alfred Jarry’s Ubu Roi, directed and adapted by Philip Geller (March 20-27), and Amy Rutherford’s Mortified, directed and adapted by Mandy Roveda (March 21-27). April will close out the academic year with the Scenes by Design exhibition of student design work (April 7-9), and the 3rd year Acting studio production of Marie Clements’s Age of Iron (April 8-10), directed by Philip Geller. Needless to say, the 2020-21 season is jam-packed with a diverse and exciting range of performance offerings. 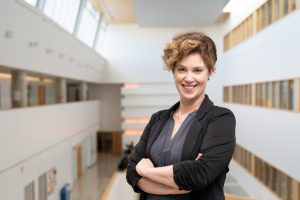