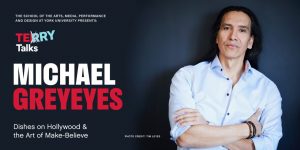 Created by Michael Shur (The Office, Parks and Recreation), Ed Helms (The Hangover) and Sierra Teller Ornelas (Superstore, Brooklyn Nine-Nine), Rutherford Falls is NBC’s newest smash-hit. The comedy centers around a lifelong friendship tested by the removal of a town statue. Michael Greyeyes takes on the role of Terry Thomas, C.E.O. of the Minishonka’s casino, who envisions big things for both his daughter and the success of their Nation.

TERRY Talks is hosted by the Department of Theatre at The York University School of the Arts, Media, Performance and Design. Open to all, the free online sessions take place Mondays in January at 9 PM EST. View the event page here.

Michael Greyeyes remembers the trials and tribulations of Indigenous representations of Hollywood in the 90s and 2000s but examines the changes he has seen more recently and how contemporary Indigenous filmmakers and showrunners are re-imagining our present and future.

N8v Families vs. the Tropes of Disempowerment

Michael and his guest Kimberly Guerrero, who plays Terry’s powerhouse wife, Renee on “Rutherford Falls” discuss how the Thomas family is a radical provocation, given Hollywood’s history of portraying N8v women and families.

In this discussion, Michael recounts how he approached Terry’s iconic speech in Episode 4 of “Rutherford Falls” season 1.  An intimate deconstruction of an actor’s approach to the most challenging piece of writing he’s seen emerge from Hollywood in the past 20 years.

Michael and his guest Jana Schmieding, who plays Reagan on “Rutherford Falls” talk about Native Joy and her brilliant article in Vanity Fair.