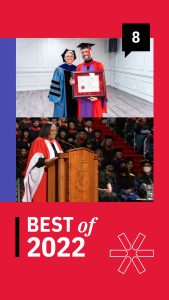 On Tuesday, June 14, Terri Lyne Carrington, a professor and internationally respected drummer in jazz was awarded an honorary doctor of letters from York University.

Carrington is both pioneering in jazz music performance and building the pathway for women performers in music. An accomplished musician, Carrington has won three Grammy awards and was the first woman to win a Grammy for Best Jazz Instrumental Album. She graduated from the Berklee College of Music and now serves as artistic director and founder of the Berklee Institute of Jazz and Gender Justice.

Excited to see how society continues to evolve because of a new generation, Carrington recognizes that she sometimes feels more like a student than a teacher. She applauded the graduating class by recognizing their role in advancing society.

“You have said times up in various ways, you said the lives of the marginalized matter, you demanded that the privileged put themselves in check, you’ve told politicians to go to hell, you’ve challenged your families and friends, which is not an easy thing to do because it can mean losing something or someone dear to you, you all have limitless potential, but it is wise to be mindful of your expectations as well to nurture your enthusiasm and most importantly your imagination,” she said.

Noah “40” Shebib is a creator who exemplifies excellence and dedication toward bringing positive change. On Oct. 12, York University recognized 40’s work as a Canadian innovator, artist, philanthropist and entrepreneur with its highest accolade, an honorary doctor of laws degree, awarded during Fall Convocation ceremonies for graduands of the School of the Arts, Media, Performance & Design; Glendon; the Faculty of Health; and Osgoode Hall Law School.

After accepting his honorary degree from York University, 40 delivered a message to graduands about the power of hard work, the creative process and the positive impact of giving back.

“After 15 years in this business, we’re all trying to find our happiness in a mindful way, so as much as I can sit here and preach working harder to you, at this point in my life, I’m trying to learn to work smarter as well,” Shebib says.