Sophie Dow (BFA 2019) is a queer and indigenous dance and music artist. Inspired by their Métis-Assiniboine roots, and in dialogue with Elders and Knowledge Keepers, Dow created Medicine Duets, a dance film that will screen at Buddies in Bad Times on June 24th as part of their “2-Spirit Cabaret”.

We spoke with Sophie about their process as a creator: 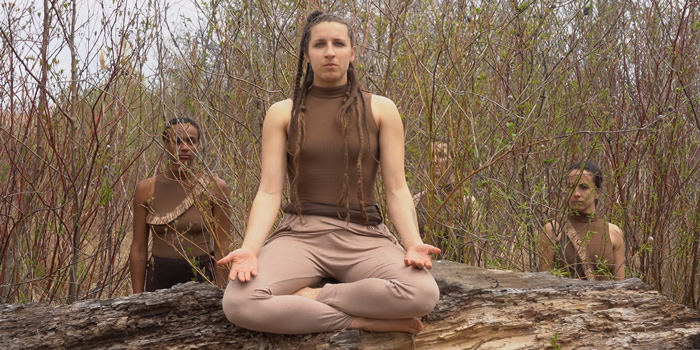 AMPD: What drove you to create Medicine Duets?

Sophie Dow: When York went on strike in 2018, I took off on tour for 5 months, primarily teaching & performing around the West coast mountains. The initial seed idea for a dance piece came to me while meditating at the base of one of those mountain in the Kootenays. I was learning a lot about Ancestors at the time and had this vision of these ancestral archetypes crawling up from tunnels beneath the mountains, all the way to the peak as a means of sharing some of the wisdom that mountains have to teach us. The first of ten iterations of the piece was realized at York when I returned from tour. It began as a quartet in the Dance Students’ Association spring showcase: Bloom, which took place at Dancemakers in the Distillery District in 2018/2019.  As the work evolved, a narrative emerged, I began working more with an Elder, a Knowledge Keeper and mentors and the process became more deeply driven by traditional teachings, particularly around the Medicine Wheel.

AMPD: How did Buddies in Bad Times get involved as a distributor?

SD: I got my applications all mixed up!  In November 2020, I thought I applied a very different, self-solo dance theatre piece to the BIBT 2-Spirit Cabaret, thinking it would be an in-person event.  In early 2021, I received an email from Daniel (who I knew from my experiences as a participant in the Paprika Festival), offering Medicine Duets a spot in the Cabaret. Originally one of my collaborators and I were supposed to go in person to film a solo excerpt with projections – an excerpt that had been adapted for the Workman Arts Rendezvous with Madness Festival in October 2020 – however with persistent restrictions, we decided to share an 8 minute film edition that we premiered at the 2021 Paprika Festival. This edition is intended as an experiment/archival footage for a larger piece that will be seen at F-O-R-M in September.

AMPD: How do you view the “solo mover” in Medicine Duets as a symbol and as a character?

SD: The solo mover represents of a myriad of ideas.  This character was introduced into the piece towards the end of 2019 while I was flipping through old personal journals and came across a scribbly drawing of a stick person standing at the base of a mountain, head tipped back, staring up towards the top.  This particular sketch was dated 2016, while I was recovering from a series of consecutive concussions.  It was a reflection of where I felt I was at that point in a healing journey. At face value, the central character (solo mover) of Medicine Duets is a human being who is visibly (choreographically) trying to stabilize themselves but loses balance and falls without a definitive marker of where they land. Trauma is deeply ingrained in the human experience and I wanted to somehow weave that into the story as a starting point, without triggering the receiver. In a literal sense, the solo mover is meant to offer aspects of recognition: that we as humans, all know how it feels to be out of balance. As the narrative progresses, the character illustrates the ability we all have to call upon our Ancestors and elements of the Medicine Wheel for strength and guidance, just as we would traditionally do in a ceremony. I intentionally compiled costumes that do not highlight body parts that may be identified with gender binaries as well as an unspecified time period, suggestive that this story and these cycles of balancing and rebalancing that we go through, are infinite. Metaphorically, the solo mover can be representative of the collective – humanity as a whole – and the ideas of working with and as Mother Nature, to regain balance on the planet by letting go of destructive cycles and honouring the stillness that can be experienced in tandem with constant states of change.

AMPD: Has queerness and indigeneity always factored into your choreography and artsmaking? Or did it emerge in your work over time?

SD: This is an ongoing conversation of many facets within my communities.  If we’re talking about aesthetics, I suppose I’ve always incorporated little “hints” within my work, particularly as far as queerness goes. For years, I’ve been deeply intrigued by Cirque du Soleil and their arsenal of characters that do not seem gender specific. In my own choreography, I’ve made some effort to soften the lines of how society defines gender, for example if there’s a male identifying interpreter in a piece that isn’t overtly about gender, I’ll casually put him in a top hat with a skirt and long eyelashes, etc.  Another example is from Dance Innovations (2017) at York – I created a piece entitled Parasol, with all the dancers in drag. The narrative focused on four people fighting over a pair of red high heels, symbolic of “ultimate power” but were driven insane in the interim. Although our intimate process and characters were not originally geared towards a commentary on gender, the costumes, hair and makeup added a whole series of layers on stage.

As far as my Indigeneity, I’ve only recently begun including more recognizable, visual cues within my work, with extreme mindfulness and under the guidance of other Indigenous mentors and Elders.  It’s something I’ve been hesitant about for a long time and I’m still reflecting, since I’ve only really been intentionally connected to my heritage for about 8 years. There’s also always the ongoing conversation about why we should or shouldn’t be placing sacred symbols on stage or in proscenium (conversations dating back to the Buffalo Bill show).

The deeper discussion on this side of the coin, is that as a queer and Indigenous (and part settler) human, technically anything I produce – whether it be a guitar-blues song about hitchiking and train hopping or a traditional song with a drum, vocables and jig steps, could/should/would be considered as queer and Indigenous, because it was dreamt, visioned and created by and from this body I am presently in.  An essential statement I discuss almost daily is along the lines of: “It doesn’t have to have rainbows, glitter, flags, turtles and drums to be queer, Indigenous arts.”

Aesthetics and politics aside, when I’m in rehearsal, I like to imagine my process as a holistic approach.  We begin with a prayer, a land honouring, a smudge if the space permits and collective breathwork to bring everyone into a focused centre together.  We end rehearsal in a circle and when appropriate, might grab coffee or food afterwards, building deeper relationships with each other and feasting our artistic practice.  If we’re looking at how Indigeneity factors in, this is a process I’ve slowly cultivated over years.  From age 3, I was fortunate to grow up dancing in studios that always began and ended classes in circle, as well as celebrating collaborative choreography.  This wasn’t ever identified as traditional, however after experiencing slightly more Eurocentric approaches in various dance and theatre settings, I am grateful for the experiences that have landed me in the place I am now and continue evolving and shaping process the more I learn. 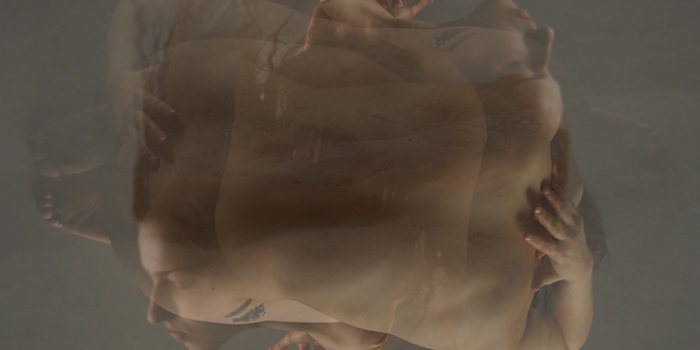 AMPD: How do indigenous attitudes on queerness differ from settler ideas?

SD: I cannot necessarily speak for Indigenous attitudes or specifically settler ideas on queerness, since many nations vary in their traditions and I carry a large pot of mixed teachings from different Elders, Knowledge Keepers and mentors.  A contemporary umbrella term that emerged in 1990 is “2-Spirit.” In my teachings, this is not a general term for someone who is queer and of Indigenous lineage.  A 2-Spirit person carries pivotal social and ceremonial roles within their circles.  In earlier times, they would’ve been the medicine person or healer for their community, possessing the ability to walk within or between multiple worlds. I was recently included in a panel with Jay Northcott, Moe Clark and PJ Prudat – Moe described this beautiful image of the term 2-Spirit as “a straddling of realms that can sometimes lack a clear definition, opening up a space to be a “doorway walker” […] SO the sacredness of carrying on these practices today is really all about being doorways.” Ma-Nee Chacaby is a wonderful Elder, author, artist and activist who talks extensively on 2-Spirit identity.

Within the language vein, French and Spanish are some of the most notoriously gendered settler languages – when it comes to the 150+ traditional languages of Turtle Island, gender is not necessarily always factored in. (ex: in French a tree is “un arbre” which is considered “masculine” while “tree” in Michif is: aen aarbr; in Ojibwe: mitig; in Nehiyaw: ᒥᐢᑎᐠ or mistik; ie: the trees are not “he or she” – they are their own beings).

In an interesting parallel, I once had a queer therapist that was not necessarily aware of Indigenous understandings, but she shared with me that “when a family is broken or wounded, they are gifted a queer child to pull them back together and teach them to hold together. Sometimes the family receives the lessons openly, other times they are not ready and reject them.”  To an extent this mirrors the aspect of the 2-Spirit person as the catalyst of an intimate community’s (in this case, the family’s) healing.

I’m not much of an expert in either the Indigenous or settler realm of perspectives, psychologies and ideas but perhaps these scattered examples can offer some form of explanation in my earlier stages of learning.

AMPD: What advice do you have for young queer artists who are still finding their voice?

SD: Really deeply listen to what you’re dreaming about.  Take healthy advantage of the platforms available that will allow you to create the visions in your heart and don’t take yourself too seriously.  There’s so many prescriptions of what queerness, Indigeneity and gender are “supposed to be” presented and performed as and a lot of presenters tend to have a checklist of what they “need” on their program to make it look “more inclusive.” At the end of the day, create what YOU want to create, explore the messages and themes that will either feed you and your process OR that you want to learn more about and ALWAYS do everything with love.  Sit with Elders, Knowledge Keepers and mentors. When you’re lost, confused, uncomfortable, go back to the land and to the roots – either your own,  those of the land you’re on or a combination of those that will keep you grounded.  Finally, understand that there is no destination when “finding your voice” – you may find a rhythm, an aesthetic or an idea that you really jive with, but allow it to grow, expand and most importantly, to change, because THAT is the only constant. 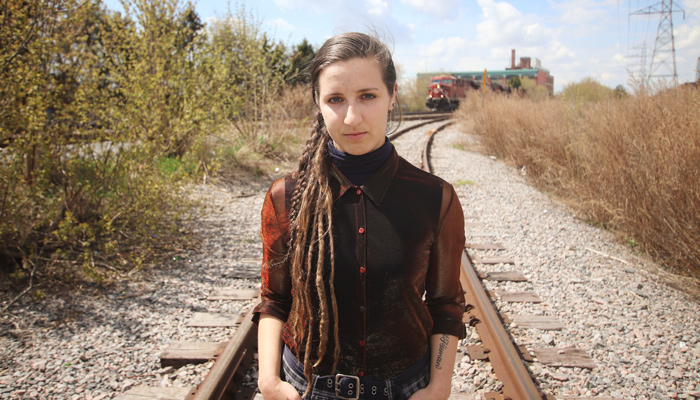