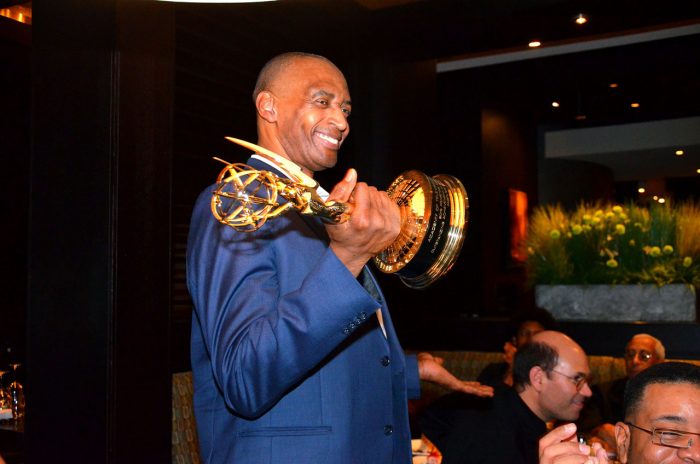 Lecturing by day, changing the audio-engineering game by night. Contract faculty member Ray Williams was recently honoured at the 2019 Engineering Emmy Awards along with his team at FabFilter, an Amsterdam-based music production and audio processing software company. The Emmy was awarded to FabFilter for their program Pro-Q 3, an audio equalizer tool with an easy-to-use interface that has been widely embraced in music production and – of course – television. According to the Television Academy, “FabFilter Pro-Q 3 has become the preferred equalizer for mixing professionals around the world.”

In a market where audio software is often modeled on complex or outdated hardware, FabFilter is applauded by sound professionals for their user-friendly interface design.  Computer Music Magazine says “FabFilter has made an indelible mark on the music production landscape.”

A man of many strengths, Williams has been a fixture of York’s Music program for 21 years and has developed courses for non-majors covering various genres. His course “Rhythm and Blues, Soul, Funk and Rap” is an in-depth music studies course that covers the wide range of African-American popular music that has shaped the music industry through the 20th century.

“Ray has contributed significantly to the Music Department for many years though his teaching and knowledge of the music industry.” says Louise Wrazen, Chair of the Department of Music, “We were thrilled and excited that he was recognized with such a prestigious international award.”

At the awards ceremony in October, Williams was was grateful to be recognized by the Television Academy.  “I am humbled by this award. It is confirmation that hard work, confidence, determination and a focus on quality has its rewards.  I want to thank all my colleagues at York University for their solid support over the years.”