A Message in Honour of Black History Month

From Sarah Bay-Cheng, Dean of AMPD

At the start of this February, I write to acknowledge and to celebrate Black History Month, a particularly important time for learning, reflection and action this year. Over the past year, calls to address anti-Black racism and to confront oppression have resonated throughout institutions and industries, invoking many necessary and overdue conversations in these areas and throughout AMPD. We all come to these conversations from different perspectives and experiences, with opportunities to lend our distinct voices and ideas to the shared and often challenging process of creating positive change in our programs, our Faculty and our respective communities. Recognition of Black History Month must be more than simply celebrating the past; it is another opportunity to affirm our commitment to each other and to the principles of equity, justice and education.

It is no coincidence that the first recognition of Black History emerged from universities. The idea of a designated holiday was envisioned by African-American historian Carter G. Woodson in 1926. Also referred to as the “father of African-American History,” Woodson wrote powerfully about the importance of education in African-American life and culture. In the late 1960s, proposals for a formally recognized holiday celebrating the achievements of Black Americans was taken up by faculty and students at Kent State University, and was first celebrated at the university in 1970. It eventually received recognition of the US federal government in 1976. In Canada, Black History Month was recognized by the House of Commons in 1995, proposed by the Honourable Jean Augustine, the first Black Canadian elected to Parliament. Today, the Jean Augustine Chair in Education, Community and Diaspora at York University (held by Dr. Carl James in Education) recognizes her exceptional contributions and continues her legacy of promoting access, equity and inclusion.

Along with education, art and design have been integral within Black histories, both in the US and in Canada. The Black Arts Movement (BAM) in the US grew throughout the 1960s and 1970s. Writing for a special issue of TDR, known at the time as The Drama Review, Larry Neal called BAM the “spiritual sister” of activism, and envisioned “an art that speaks directly to the needs and aspirations of Black America” (1968). Across the programs and areas of AMPD, we acknowledge the significant contributions of Black artists and scholars who have contributed so much to the artistic and educational legacies of the arts at York. Over the next month, student success mentors will be promoting contributions of Black Artists to the AMPD community on their Instagram account.

Of course, chief among these important contributors to the arts at York is the great Canadian musician, Oscar Peterson (1925-2007). As the Canadian Music Hall of Fame noted: “An eminent jazz pianist with technical mastery and limitless creativity, Oscar Peterson was a performer who could instantly inspire awe.” From 1984 to the late 1990s, Peterson was a piano and jazz instructor in the Department of Music, where he created several student awards. He served as York University’s Chancellor from 1991 to 1994 and was appointed an Honorary Governor in 1995. Originally from Montreal, Peterson would become an international icon, performing with Count Basie and Duke Ellington, among many others. In recognition of his exceptional contributions to Canadian music and to the University, the Ontario government endowed the Oscar Peterson Chair at York University, currently held by the jazz trombonist, Prof. Ron Westray.

As we enter Black History Month, we look to these and other examples from the past and present, not just as celebrations of prior achievements, but more importantly as the inspiration and foundation to continue and expand their legacies for new generations of students at AMPD.

Focusing on Black History throughout the arts, media, performance and design at York is not a project relegated to a single month nor an academic exercise focused exclusively on events in the past. It is, rather, yet one more opportunity to reflect on where we have collectively been and where we aspire to go to create a more equitable society for all of us. Many have observed that words are easy, while meaningful actions are hard and the efforts are ongoing and often frustrating. We remain aspirational, even as we acknowledge that change comes slowly. This is why the arts are essential to all aspects of education, both at university and beyond. They uplift and inspire even as we set ourselves to the hard challenges before us. As the African-American historian and sociologist W.E.B. DuBois once wrote,

I sit with Shakespeare and he winces not. Across the color line I move arm in arm with Balzac and Dumas, where smiling men and welcoming women glide in gilded halls. From out the caves of evening that swing between the strong-limbed earth and the tracery of the stars, I summon Aristotle and Aurelius and what soul I will, and they come all graciously with no scorn nor condescension. So, wed with Truth, I dwell above the Veil. (Souls of Black Folk, 1903)

This message is just one part in an ongoing conversation among many throughout AMPD and beyond. Over the next weeks and months, we will have continued opportunities to hear from more voices throughout the Faculty, and to hear the perspectives, ideas and goals from our students, faculty and staff. I wish you all a meaningful month ahead and look forward to our ongoing conversations and efforts together. 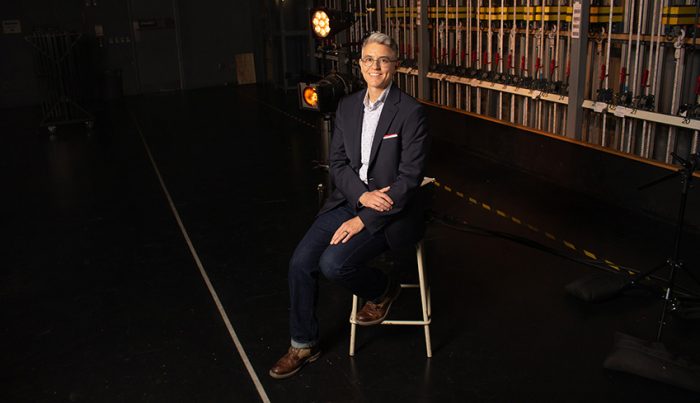