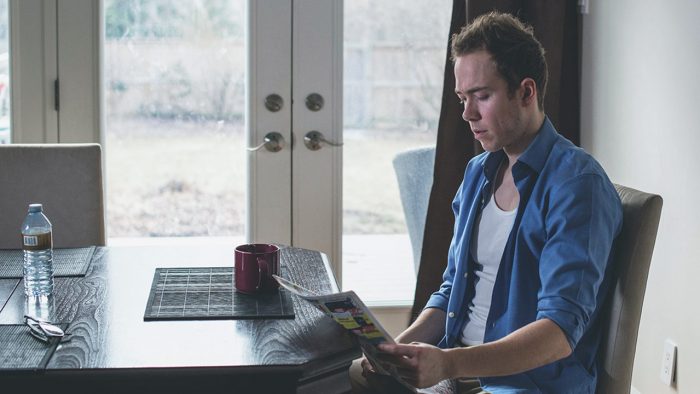 Featured on YorkFlix – our brand new online streaming platform for student films made at York – is The Bump (2017) written by Jazmin Batey and Natasha Levinski, and starring Kenton Blythe as Fred.  The Bump was a 3rd-year film project for director Alexander Desouza.  We spoke with him about his inspiration and his process.

How would you summarize your film?

The Bump is a story about the manifestation of guilt in people. The story revolves around Fred, a real estate agent who is forced to make a difficult choice after an unusual drive home from work.

How has it been received?

What inspired you to tell this story?

One of the challenges that was presented to me while in third year, was making a short that would explore the complexity of human emotion. At the time, I had done a lot of thinking on the themes of guilt and it’s manifestation in people over time. Upon hearing stories upon stories in the news about similar situations, I thought it might be interesting to develop a film where we can follow and experience a character such an emotion in their life.

Were there any creative breakthroughs, or challenges you overcame?

I think being able to practice communicating clearly as a director and standing strong in expressing your voice as a director is a major lesson that I learned through the making of The Bump. In such a creative field, there will always be many voices and opinions, and at the end of the day being able to listen and communicate authentically to an audience was something that I began to overcome in the making of this film.

Is there anyone from your film crew that you want to collaborate with again and why?

Yes, there is one person that I continuously love to collaborate with and his name is Adam Van Boxmeer (Editor for The Bump). Having worked on my 2nd year, 3rd year and now post graduate films, Adam and I have a great working relationship in being able to deeply understand the process of editing and putting together a story, all the while sharing a common vision.

What advice or tips about resources can you give to York student filmmakers to make the most of their university film experience?

I’d say get as involved as much as possible which is something that I can’t stress enough. Joining upper year 3rd and 4th year sets, clubs or even reaching out to those in your program, grabbing a coffee together is one of the major ways you can really enjoy the University film experience. Always seek out new opportunities to meet like minded people, for you never know if you might never know where friendships and connections can take you. The film industry is a small world out there.